You are here: Home1 / Violence in the Wild2 / Sane, Socialized and Deaf to the Music 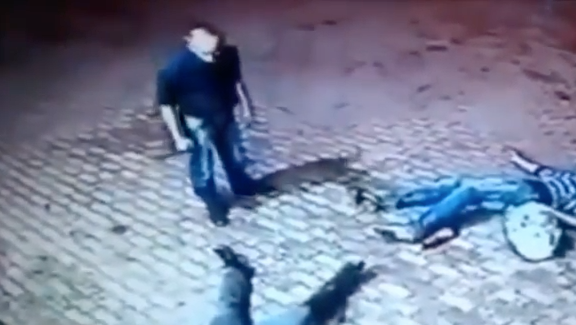 The truth about violence pervades the world like the music of the spheres — it’s out there, soundtracking the inevitable gyre of history — all you have to do is listen and you would know what the sociopath and the criminally insane know.  You would be dangerous with nothing more than a little open-minded attention.

But you don’t want to hear it — you’ve been trained from childhood to process it as cacophony, chaos, noise with no rhyme or reason.  It’s something only bad people do, and you’re not a bad person, are you?  Of course not.  So stop up your ears and chant “la la la” to drown out that ever-present, persistent beat.

You might know what the worst among us know — that it’s so easy you don’t even need to train for it, that everything between you and violence is imaginary.  This is what dangerous people know.  Dangerous people know they can go from zero to 90 in the blink of an eye — they can get up from that fancy dinner table and launch themselves through a broken thing because there are no physical speed bumps in capital-R Reality.  All impediments to action are mere choices.

Now, outside of your attempted murder this imaginary stuff is wonderful; it allows us to cooperate with people we don’t know — it’s why there’s a flag on the moon — but it gets in the way when the other person has chucked it all in favor of pure physics and physiology.  As Master Jerry L. Peterson said to me when we first met, “The difference between you and me is that I won’t hesitate the quarter-second you will.”

Being dangerous is easy.  All you have to do is watch videos of dangerous people doing what they do, and then replicate that work on the mats.  Get straight to it — ATTACK & INJURE — keep doing it until you’re done.

If only you could hear with Nature’s ear it would be that easy.  Instead you get in your own way, you worry about imaginary things, you empathize with the victim and play desperate mind games to try and save them (yourself) though they be perpetually doomed no matter how many times you watch that video…

The good news is that we’ve done the translation for you, we’ve codified violence, made it trainable for “sharing monkeys” — it’s not just for the organically damaged or morally ambiguous anymore.

It’s important to note that while we’d like to take on aspects of the ambush predator (to become a “booby trap,” if you will), it’s not about the hardening of the heart or behaving like a sociopath in other areas of your life.  Letting go of fear in favor of resolve doesn’t make you a bad person, no more than going to the gun range makes you a monster.  It’s merely deciding, ahead of time, to ignore your social programming when you are faced with violence and have no other choice (because attempted murder only responds to action in kind)…

…and then training accordingly.

It’s Not About You
Action & Silence: How to Dress for Violence
Effective Human Incapacitation
VIOLENCE:  If It Feels Right, It’s Wrong
That New Victim Smell
Keeping It Simple
2 replies

VIOLENCE:  If It Feels Right, It’s Wrong Injury Dynamics — What We Do
Scroll to top