You are here: Home1 / Training2 / Mama Said Knock You Out:  Women in Hand-to-Hand Combat Training 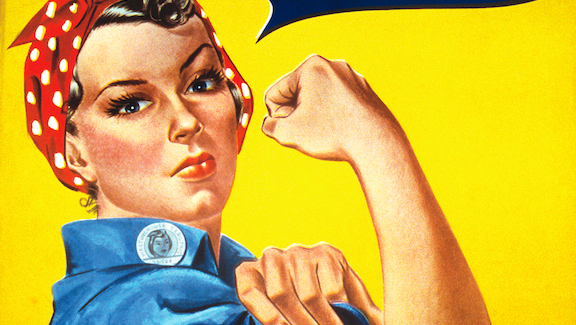 When a bullet enters an eye, there’s nothing in that interaction that is affected by the gender of the person who pulled the trigger.  The universe doesn’t stop and check to see if it was a man or a woman before allowing the chunk of metal to tear through soft tissue — the only question in the cold equations is “Does the energy exceed the tissue’s ability to deform without disruption?”  Will it bounce, or stick?

Likewise, the question of gender doesn’t matter to the newly blind person, and the first responders dealing with the casualty don’t care about the chromosomal makeup of the shooter.  Gender has no bearing on the energy interaction event — either there was enough “oomph” to wreck anatomy, or there wasn’t.

Don’t mistake the ability to deliver a beating with the ability to take a beating, or to overpower someone — which is what we think of when we think of “fighting.”  The poisonous idea that violence is about going toe-to-toe and trading blows in a contest of durability and strength — like rams butting heads — reinforces the belief it’s something women can’t do, or at least that they need special classes, tailored to their gender, in order to have any hope for survival.

While a big, strong man can “take a beating” (endure non-specific trauma) it’s a different story with a ruptured eyeball.  Or a collapsed airway.  Or a knee folded backwards.  The average adult female weighs more than enough to do all of that work — the universe only cares if the burst rating of the anatomy in question was exceeded or not.  If the cold equations math out, it’s broke.

We don’t differentiate between genders in this work because gender has no impact on the raw physics.  A finger in the eye is a finger in the eye, chromosomal makeup or identity notwithstanding.

As of this writing, the last two people who had to use this information were female; both were in life-or-death situations, and both handled it with specifically applied blunt force trauma — two injuries each to achieve nonfunctional states — and both walked away as the winners.  They weren’t bigger, faster or stronger than the men they put down — they just knew where to apply the forces they were capable of generating.  They didn’t waste any time or effort on trying to defend themselves or “fight for their lives.”  They just hurt people — the very definition of “dangerous.”

One of the things I’ve learned in my 28 years of teaching is that while the men we train have to navigate the stupid dance of intermale aggression, it’s the women, on balance, who end up having to use violence for survival.  Women know truths about our society that men can barely intuit (often being the unwitting perpetrators of inequality, if not outright predators themselves) and so women show up for training with a much more sober outlook on what’s at stake.  They know it’s not a game, and that they can’t afford to screw it up — this makes them get better, faster than their male counterparts, something many men find frustrating, especially in a husband and wife team where the wife is doing far better than the husband at this thing that is ostensibly the epitome of manliness.  The best thing for everyone in this situation is to drop the social stuff and focus on the mechanics where we all meet in the middle.

At our most recent weekend seminar I had two participants thank me, one right after the other, notable because of the social distance that separated them:  the first, a man, a former police officer who had just returned from a decade of contract work in the Middle East (precisely the kind of person one would expect to find at a course like ours); the second, a woman, a brave survivor of some truly harrowing violent experiences.  Both reported that they got a lot out of the course and appreciated it a great deal, something that didn’t surprise me as they were both well-versed in the realities of violence before they set foot on the mats.  Upon later reflection it occurred to me that what made this significant was that they both took the same course, at the same time.  We didn’t alter the course for their assumed social and gender roles — it wasn’t “women’s self-defense” or “manly combatives” — it was applied physics and physiology, the use of violence as a survival tool, the place where all of us, as vulnerable meat machines, are rendered starkly equal.

This is why women who train with us report that while they may have been initially reluctant to hit the mats (our lack of sugarcoating repels everyone), once they realized it was just physics and physiology — stuff that’s always on and available to everyone — they wanted more.  I’ve seen the most unlikely people — people who would never in their wildest dreams imagine themselves in a “hardcore” hand-to-hand combat course — engage calmly and coolly in the ancient work of pure survival, pressing a head to the mats to slot a knife into the carotid, for example.  And so someone who showed up because they were afraid of what might happen to them is too busy doing to remember that initiating fear.  What was once terrifying is now a tool held firmly in the fist.

While there are things we could do to make the course more appealing to women (and men, for that matter), that would require wasting time talking about things that just don’t matter.  Our lack of pandering isn’t about making everyone “tough it out” equally, but about the fact that the social stuff we think about all day, every day, just doesn’t matter when the skeleton, driven by mass in motion, penetrates the eye socket.  We don’t care about societal norms and minor differences in plumbing because the cold equations don’t care, either.

Here’s what our female instructors and the women we’ve trained want you to know:  regardless of what the world tells you, if you want to do this, you can.

It’s Different for Me: A Woman’s Perspective on Hand-to-Hand Combat Training
Be the Problem
6 replies

The First Filter Criminal Violence and Self-Defense: On the Intersection of the Natural Order...
Scroll to top