You are here: Home1 / Kinder than Necessary2 / It’s Not About You 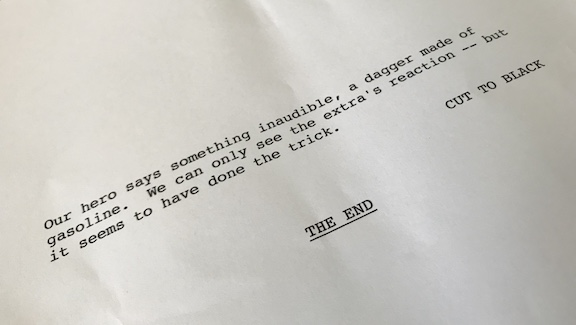 Unless you’re a jerk, and then it’s your own fault you just made it personal…

The unfortunate thing about the experience of consciousness is that we are, each of us, the star of our very own movie. The story is all about you, it happens to you, and you have screenwriter and director credit. (Of course it doesn’t always feel like you’re the architect and author, but believe me, when the final credits roll you’ll catch the blame for how it all turned out, right or wrong.)

Most of the time you’re sitting alone in the theater, munching popcorn and sipping a ludicrously-sized Coke, watching the whole shebang swirl gradually by on the screen, amused and pained in turns by the familiar cast of recurring characters. Here comes Relative #3, going on about the stuff she always goes on about; now it’s Protagonist’s BFF who always knows just what to say — as long as he isn’t drunk. And so it goes. You sit and munch and sip amid the swirl…

…until that awful moment when one of the extras — one of the extras — breaks the fourth wall and addresses you directly, in tones normally reserved for Relative #3 or your drunk BFF. This time, it’s personal. You get ready to pop off with a cutting Tarantino riposte, and maybe a fantasy gunfight sequence. And the projectionist, being nothing more than an obedient employee, gets ready to roll end credits —

Here’s the part where I break the film, or have the projector jam and burn through (or just have the signal glitch, you know, for you kids) so you can leave the theater and see what you’d otherwise miss completely: the extra’s theater.

The first thing you notice is that it’s not as nice as yours; maybe it still hasn’t recovered from the fire, or the water damage. And it’s smaller — or bigger, but in a totally non-cozy, scary sort of way, full of too much echoing dark. And they’re not sitting alone — they’re surrounded, maybe, by the ghosts of the unquiet dead. Instead of popcorn and a Coke they have to hold a crying child the whole time.

Of course, it was all just a dream, because you can’t leave the theater of your skull, and as writer, director and Capital-S Superstar it’s time for you put that mouthy extra back in their place and let them know what’s what.

And the projectionist, being nothing more than an obedient employee, gets ready to roll end credits —

You know, just in case.