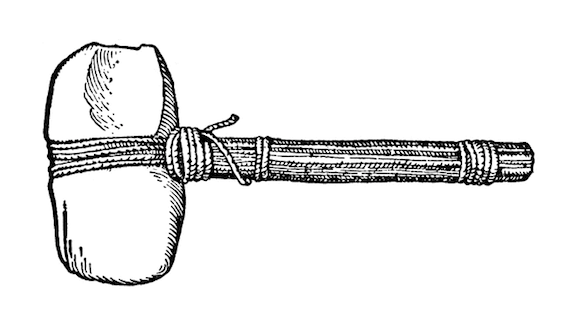 Search the google-sphere for framing hammers, you’ll see everything from a $345 all-titanium super-hammer to the good old fashioned $24 generic California framing hammer. Nothing too dissimilar from the rock our ancestors tied to the top of a stick to help accelerate a hard object into another object to increase the work being done to the object being struck. Just a bit more efficient and durable.

Originally, the object was struck to obtain food of some sort (opening shellfish, killing prey, etc.), or to prevent you from becoming food (killing another predator). And the reality of the way things worked out, pure necessity dictated that every one of our ancestors had access to this information for survival. We all learned and knew how to “swing the hammer” to smash something to eat and/or to survive violent encounters with other humans or animals vying for similar resources.

As societies developed along the way to modernity, hammer-swinging became compartmentalized, either removed from everyday use due to specialization by craftsmen and farmers or monopolized by “society” through governments and laws. These days the grocery store puts shellfish in a can for us, the butcher and farmer remove the laborious task of killing and harvesting animals ourselves, the carpenter builds our shelters, and the state “swings the hammer” of justice. The good citizen goes to the store for food and calls the police to intervene when the need to “swing the hammer” arises.

Over thousands of years of relying on others to “swing the hammer” for us, the skillset has been lost, buried deep in the DNA of the average citizen. The biomechanics of the human machine haven’t changed at all in that timeframe, leaving the ability to “swing the hammer” dormant inside each one of us: a concept proven day-in and day-out through the execution of criminal violence. Humans wisely relinquished the responsibility of daily “hammer swinging” so that we would not have to take resources by force and/or face potential violence on an ongoing basis, but as a side effect most have lost connection with or understanding of the utility of “the hammer” itself.

The human skeleton, when used to do violence to another human skeleton, is as utilitarian and design-ready a tool as the modern framing hammer is to a carpenter. Even without instruction, practice, or experience, an enthusiastic novice using either tool could get successful work done. With a little instruction, some common sense and a couple of errant shots to the thumb, you could probably nail some boards together and build a shelter to get out of the rain. Likewise, a couple of tips from someone well versed in How Swingeth the Hammer could end up saving your life.

A couple summers “humpin’ lumber” for your uncle’s construction company and you could pretty much get a job bangin’ nails somewhere again (if you worked hard and weren’t just there because your uncle owned the business). Ten to 15 years on the job, you could be a foreman or own your own company. A lifetime building homes and learning from the wisdom of hammer swingers before you, well, someone might one day call you a master carpenter.

The utility of the hammer as a tool has been proven out over thousands of years by the relatively small change in design. Because humans designed the hammer to increase the capacity of the human machine to do work, there are only so many efficient ways to swing a hammer. The road to master carpenter, then, lies not in the hammer used but in the experience wielding the tool, multiplied by the quality and breadth of that experience over time. (If you spend the first five years trying to hit a nail into wood with the wrong side of a claw hammer, or if your teacher is more interested in selling you his overpriced, signature series, all-titanium super hammer than training you how to swing your hammer yourself, well, your road might be longer.)

One thing to understand is that no one has a patent on “swinging the hammer,” including us. The hammer has been in the public domain forever, and can only exist there because when the law is gone the hammer remains. A broken neck (one potential result of “swinging the hammer”) extinguishes the need for patents, as the process to achieve a broken neck is immaterial to the result. A broken neck does not care that the person doing so was trained or untrained, what “style” or “technique” was used to break the neck, or who has the rights to said technique, or whether that technique was the most efficient way to achieve the result. Moreover, the broken neck cares not of the Laws of Man.

At Injury Dynamics, our training compliments any prior training and we are not interested in anything other than educating people about the confluence of physics and physiology with catastrophic results. With a body of knowledge and a curriculum for training that knowledge, the Injury Dynamics technicians are experts at showing people how the human machine breaks, how to do that work with your bare hands, and how to take advantage of those results.

What marketing people tell me is that if I really want your money I should sell you my Master Matt Signature Series All-Titanium Super-Hammer, which I used in some awesome story about myself that makes you feel good about giving me money for a hammer that doesn’t make you build (or break) things any better, or give you experience wielding a hammer yourself. I should tell you that in a few easy lessons, you’ll be able to swing nail-for-nail with the best craftsmen in the world (including myself, and being the most awesome person possible it’s going to cost you.) And all this because I’ve boiled down my years of experience into the three easy secrets of carpentry that cuts out the hard work of actually learning how to hammer. Which you can also have access to in my video series, Hammer of the Gods, in which I finally reveal to the Average Joe the Inner Circle secrets of master carpenters everywhere…

Unfortunately, with the proverbial hammer, all you’ll have is you, your experience wielding your hammer, and your willingness to do the work in front of you. At Injury Dynamics, our instruction is designed and committed to service those three goals.

So… grab a tool belt and a bag o’ nails and come swing the hammer with us.