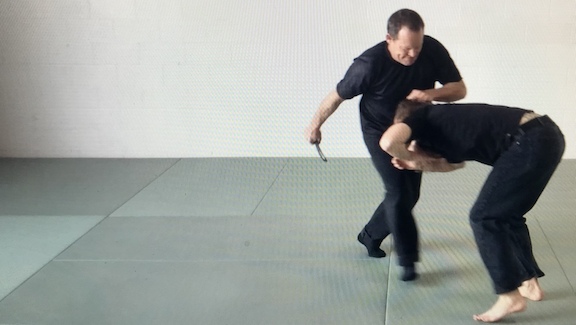 Anyone can train — but it’s not for everyone.  And that’s okay.

All I ever wanted to know was how to hurt people.  The standard path for such things in the 1980s was traditional martial arts, and after sampling a multitude of various classes, schools and approaches I had resigned myself to the Sisyphean vision quest of “take what is useful, discard the rest.”  A neat idea — but man, what a mess to sift through.  It was like an 1800s medicine show, the bright bottles of the actual cures indistinguishable from the glittering rows of abject quackery, and there was no way to objectively sort them…

That is, until Don spoke up at the water fountain after a great session on leg sweeps.  Don wasn’t just a black belt at the school; it was understood that as a dockworker and mariner he had “seen some things” and so was the go-to source for information on what it actually took to beat a man into unconsciousness.  He certainly looked the part:  refrigerator-bulky, hands like spades that could be curled into rude clubs, a battered face set with calm eyes.  My brother and I were gulping water between attempts to catch our breath when Don rolled up with his vast, lumbering stride, looked left and right, leaned down to us and said, in a fierce, conspiratorial whisper, “You boys forget all that bullshit in there — if it really hits the fan you stomp his knee as hard as you can to put him down, then kick him in the head until he stops moving.”

We froze, mouths agape.  The water ran and splashed.

If that’s true, I thought as soon as I could think, why aren’t we practicing that?

This first piece of real information — an account from someone who had done these things — was the catalyst that got me off the merry-go-round.  Of course, I wasn’t happy about it; the answer seemed to be “learn by doing in the French Foreign Legion!”  Luckily there was a part of me that realized how stupid that would be, so I figured it was just something I could never really know, let alone train for.

Fast-forward months later to my brother bursting into the house, running to my room and hanging breathless in the doorway.  “I found it,” he gasped, “what we’ve been looking for.”

“Sure,” I said sarcastically.

“I’ve heard that before.”

I figured it was a waste of time.  I would walk in the door and see the usual:  bits of information gleaned from ancient battlefields hopelessly mired in the garble of a centuries-old game of telephone, inert and useless, like a stinging insect in amber…

Instead, I saw a man holding another man by a fistful of hair — to keep him bent over — while walking him backwards across the room and stabbing up into his neck repeatedly with a training knife.

It was a dolly-zoom moment where the entire universe convulsed inside out — they weren’t training to defend themselves from this situation, they were training to do it.

And I’ve been doing it ever since.

Cool story — but what’s the point?  It’s this:  If I have to convince you to come train, it’s not for you.  This training is for those who recognize the utility of it on sight.  If you’re unsure, or don’t think you can make it work, you’re right.  In the end, it’s on you to make it work.  There’s nothing inherently effective about any training; all training is just choreography, movement that has the potential to be effective when intersected with the human frame.  Anyone can knock someone out:  an MMA fighter, a boxer, a traditional martial artist, even the completely untrained; and when they do, it will be for the exact same reason in every instance — because they did work (force times distance) on the brain and caused a concussion.  It will work because they made it work.

I encourage everyone to train — the experience of putting hands on people and having people put hands on you makes you harder to kill — but you need to train the thing you know in your bones you can actually do.  Seek out training that makes sense to you, and fulfills your needs, with instructors who are genuinely interested in your success.

It’s not my job to convince you — my job is simply to make it available.  To maintain the information, provide a space to train, and teach.

We’re here if this speaks to you; and if not, I wish you all the best in finding what does.