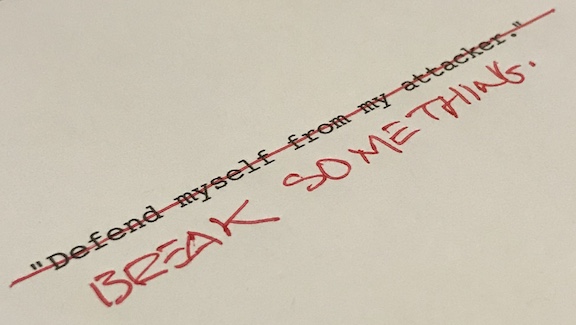 The way you’ve been taught to think and speak about violence is fundamentally flawed.

How do I know this?  Because you’re taking the time to read about it here.  Dangerous people, those who already know how to use violence as a tool, don’t go looking for answers on the Internet.  They know in their bones the Iron Law of what physics does to physiology; they know that the person who gets it right first wins.  They don’t waste time or effort on defense or protection.  They know that the answer to every problem in violence is ATTACK & INJURE.

Imagine, if you will, a fancy dinner party where someone asks you about “that class you’re taking.”  The entire table of pinkies-up dignitaries and chic-coiffed influencers pause mid-slurp to listen.  So you say, “I’m learning how to defend myself from an attacker with a knife.”  And the room makes an appreciative noise followed by a mild golf clap.  Polite society approves.

Now let’s go back after you’ve learned the truth about violence.  Someone asks the same question.  So you say, “I’m practicing how to stab people in the eye when they’re not looking.”  And the room makes the shocked sound of ruptured sensibilities, followed by you never being invited back again.  What you said sounds crazy.

But how do you want to behave during your attempted murder?

Do you want to “try to defend yourself from an attacker with a knife” or “stab him in the eye when he’s not looking”?

Which one sounds more definitive?  Which one would you bet your life on?

This is the difference between rabbits describing what wolves do, and what wolves actually do.  When rabbits talk to other rabbits about wolf-stuff it’s with a mixture of disgust, fear… and queasy awe.  But when a wolf comes for that rabbit, somewhere deep down inside that rabbit wishes it could do wolf-stuff.  If only, in that too-brief moment, it could behave like a wolf.